Menu
Please read our updated COVID-19 Response Plan so you can continue to train your canine in a safe environment.
Read Response Plan

About a Boy and a Dog

About a Boy and a Dog

He was scared – really scared! His posture was rigid, his breathing was rapid, his eyes, wide open and bright, expressed both fear and fascination. Cooper, at seven years old, was terrified of dogs. As Mr. Big approached, Cooper stepped back and held his teacher’s hand tightly. She reassured him and gently encouraged him to be brave. Then, suddenly it happened — a wonderful ‘first step’. Cooper moved closer to Mr. Big. That tentative step towards the small ten week old German Shepherd puppy was the beginning of ‘Project Big’.

‘Project Big’, didn’t end there. For one month, Cooper spent part of every recess and lunch visiting Mr. Big. During the first week, Cooper walked beside us as we walked the puppy. Cooper’s friends ran up to the fence and reached through the mesh to touch Mr. Big. Cooper clearly enjoyed the attention of his school mates. Their enthusiasm and encouragement helped him to move to the next step.

Cooper was tentative when he first held the leash. It fell from his hands a few times on his first walk. By the end of the second week, the two of them – puppy and little boy – began to walk together. Gradually, his teacher and I fell further behind as Cooper and Mr. Big walked and talked. Cooper’s smile grew daily, and by the third week, Cooper had summoned the courage to touch Mr. Big. By week four, Cooper was ready to meet a full sized dog.

We enlisted the help of Katie, Mr. Big’s mother. Katie is a large and serious dog. Her gaze is intense and her attitude is confident and fearless. We knew if Cooper could connect with Katie, he would be able to respond more confidently to other dogs.

When Cooper first saw Katie leap out of the truck, a look of panic returned to his face. But it soon disappeared when Mr. Big bounded up beside his mother. When Katie reached down to affectionately nuzzle her puppy, Cooper’s face brightened and his posture relaxed.

Mr. Big proudly pranced forward to introduce Cooper to his mother. As Cooper grabbed the leashes of both puppy and mother, he seemed to stand taller, with more confidence. Strangely, Mr. Big stood proudly too! And, if you don’t believe me, just ask Cooper. 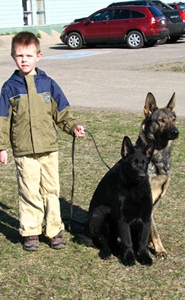