Catch Me If You Can!

Catch Me If You Can!

Like young children, puppies are motivated by curiosity, and eagerly explore the new and exciting world which surrounds them. They push through fences to inspect the rich and alluring smells which are always found outside of their boundaries. They unearth flowers and bushes and dig up lawns to expose the hidden soil beneath. They challenge older house dogs to see what they can get away with. And, they test the patience and resolve of their human owners by ignoring commands to come or to stay.

Mr. Big, my twelve week old German Shepherd puppy, has realized he can run faster than I can. This realization has empowered him, giving him the idea that he can do exactly what he wants because I can’t catch him. I command him to “come”, and he stares at me with a mischievous smirk and dashes around the property. He thinks he is playing a wonderful game and is quite surprised when his invitation to play ‘catch me if you can’ is not received positively.

I have resorted to some cunning strategies to counter Mr. Big’s reluctance to come. For awhile I was able to catch him by quietly sneaking up on him when he was preoccupied with sniffing. When he became wise to this tactic, I started throwing handfuls of food near him. This distracted him long enough to allow me to grab him from behind. I have used a cheerful voice to beg. I have used a loud voice to plead. I have even used an authoritative voice to command him to come, but it seems the more I have wanted him to come, the less willing he has been to come.

So, for the past week I have tried a new tactic, and I think it has been working. I have been calling Mr. Big at least ten times each day. When he has responded positively, we have played tug and I have let him win and carry away the toy. At other times I have given him a food treat when he has arrived, and then I have let him go back into the yard to explore. About every tenth time I have put him in his kennel with a biscuit and have told him what a wonderful puppy he is!

As Mr. Big matures I expect he will challenge the “come” command. When this happens I will switch to a more directive technique. This will involve placing a long piece of inexpensive string on Mr. Big’s collar. He will be allowed to roam freely around the yard with the string dragging behind him. When I ask him to come, and he resists, I will simply pick up the string, and pop it until he moves towards me. When he arrives I will give him a treat and praise him for coming. I know he will eventually be reliable when I ask him to come.

When teaching your puppy to come, be calm and patient. Don’t always call your puppy to “come” and then put them away and leave. Any smart puppy — and they are all smart puppies – will quickly make the connection that if they do respond to the “come” command, they might be left all alone. Instead, call your puppy to “come” and then reward them with treats, praise, and attention. Don’t fall for that ageless puppy ploy by engaging them in a game of “Catch Me If You Can”. We humans are much too slow to win! 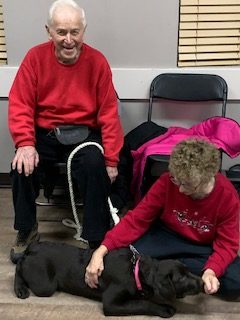